We're excited today to have a guest post from Francesca Gariano, a freelance journalist who blogs at Life According to Francesca. You may be familiar with her from a Q&A we did with her a few years ago, during which we discussed her experience getting clear skin using the Lexli Acne Kit. We asked Francesca to come back to talk about how stress and environmental factors (e.g. air pollution) combined to wreak havoc on her skin - and what she did about it.

It’s estimated that around 60 million Americans struggle with acne. 60 million! Of that number, 20 percent will continue to struggle with breakouts into adulthood. For so long, I felt like I was alone in my decade-long struggle with problematic skin when it was more common than I realized.

Social media as it is today wasn’t around when I first started developing acne in middle school, so the date of my first ever breakout is not documented for all to see, but it has to have been sometime in sixth or seventh grade. For some context, this was in the mid-2000s when being interested in skin care wasn’t cool yet and all we had were hoards of over-the-counter salicylic acne treatments in the suburbs where I grew up. I didn’t see my first dermatologist until my senior year of high school, leaving me with about six years of trying everything under the sun to help with my breakouts and increasingly oily skin. Throughout college, my skin went through its ebbs and flows of breaking out, then gracing me with a week of clear skin, before breaking out again.

There was a brief moment in time for nearly a year where my skin was what I would call, in unprofessional terms, “pretty okay.” I had moved home from college, my four years of endless stress now behind me, and I was back in the suburbs with its clean(ish) air and my troubles left behind. My skin wasn’t breaking out with cystic acne every couple of weeks; it became less oily and more normal, and everything seemed under control.

That was, until I moved to New York City at age 22 with only two-weeks notice and watched as my skin transformed from “pretty okay” to my worst acne yet.

What happened to my skin when I moved to the city?

I can only describe my skin’s reaction to my big, exciting move as tear-worthy. This was partially because the cystic zits on my face were physically painful and partially because looking at them made me want to cry. My skin wasn’t as oily as it was when I was a teenager, but the breakouts were just as aggressive. I had, essentially, red welts lining my chin, hugging the area around my mouth, and even popping up on my cheeks. No area was left untouched by my raging acne and I truly was at a loss.

Because of the mood, my skin was introduced and reintroduced to factors that just didn’t agree with it. Between the stress of moving to New York City and starting a new job, having a new diet that was controlled by a strict budget, and becoming a resident of one of the most polluted cities in America, my skin had a lot to deal with in a short amount of time.

How did I handle the breakouts?

I knew from experience that, unfortunately, my acne was not going to go away overnight. It was going to take time to find the routine that worked best for me, all while also working on balancing my stress levels so it was not increasing the likelihood of my flare-ups. Stress can cause our body to create more androgens (a male hormone, including testosterone) that will in turn stimulate your skin’s oil glands, leading to, you guessed it, acne! I was taking an oral medication that already decreased the production of androgen, previously prescribed by my dermatologist, but it just was not cutting it when it came to the first three months of my move.

There is a lot of pressure to have an extraordinary skin care collection and an extensive regimen, but I knew I needed to bring it back to basics to get my skin back to a state of equilibrium. I started using Lexli’s Acne Kit for my daily routine, morning and night. I needed to tackle some of the underlying issues that my skin was having, including inflammation and redness (think, redness even full coverage foundations could barely conceal), clogged pores, oil, and an overall uneven texture and tone. Stress aside, my skin was getting clogged with dirt and debris from the environment around me and it didn’t help that it was transitioning from spring to summer extremely quickly with the added benefit of sweating profusely. My congested skin needed help, and a lot of it. 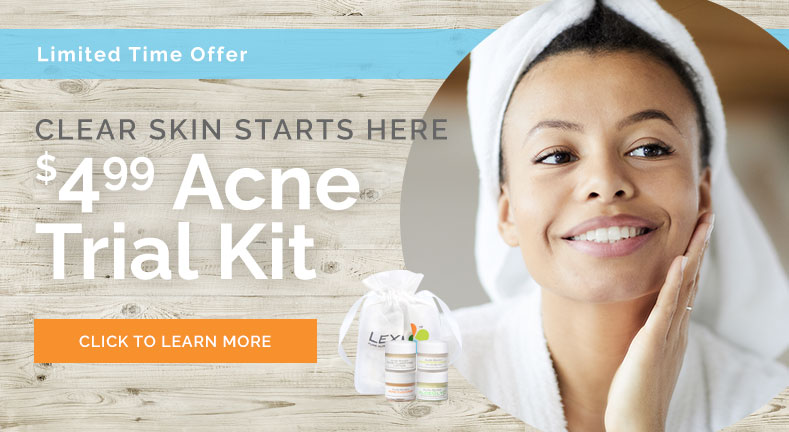 I took the basics of my everyday routine and continued to follow those steps trying not to introduce any new products–neither skin care nor makeup–into the regimen. I cleansed twice a day and made sure to thoroughly remove my makeup at the end of each day like I had before to remove all of that residue as well as any of the dirt and debris that was trapped on that layer.

One of the biggest things I introduced into my skincare and that still continues to hold a place in my daily routine was antioxidants. Air pollution can damage your skin’s collagen and make your complexion appear dull, while also destroying our moisture barrier and causing redness and acne. Antioxidants helped immensely when slowing down the effects of the environment around me.

It wasn’t until a month into my back-to-basics routine that I started noticing bigger changes in the texture of my skin. I still had residual redness from active spots and from previous spots that I foolishly tried to fuss with ( don’t mess with your zits , guys!). The activity on my cheeks was the first to go when it came to my new routine, which, in addition to skin care also included ensuring my makeup brushes were consistently washed and that I was diligent about switching up my pillowcases to avoid any residual dirt and debris embedded into the fabric.

The acne on my chin and around my mouth was–and consistently has been–the most difficult to deal with. For my skin, those breakouts tend to be the most aggressive, coming back like repeat offenders and burrowing deep beneath my skin to start with instead of just being an in-your-face whitehead. I had to practice patience with a topical treatment, while also making sure my skin was being cleansed and moisturized to avoid any excessive dryness. All in all, it took nearly two months for my skin to look the best that it had since, well, elementary school. From there, I had a blank canvas to work with when it came time to restore the remaining balance back to my skin, including texture improvements from previous inflammation (another reminder not to pick your zits!), dullness in my complexion, and all-around hydration.

It was a long road to balanced skin and breakouts still happen from time to time when I’m stressed, dehydrated, not eating right, or am having a bit of a hormonal moment. In a perfect world, my skin would never break out, but that’s not reality for most of us. Statistically, about 12 million to be exact!